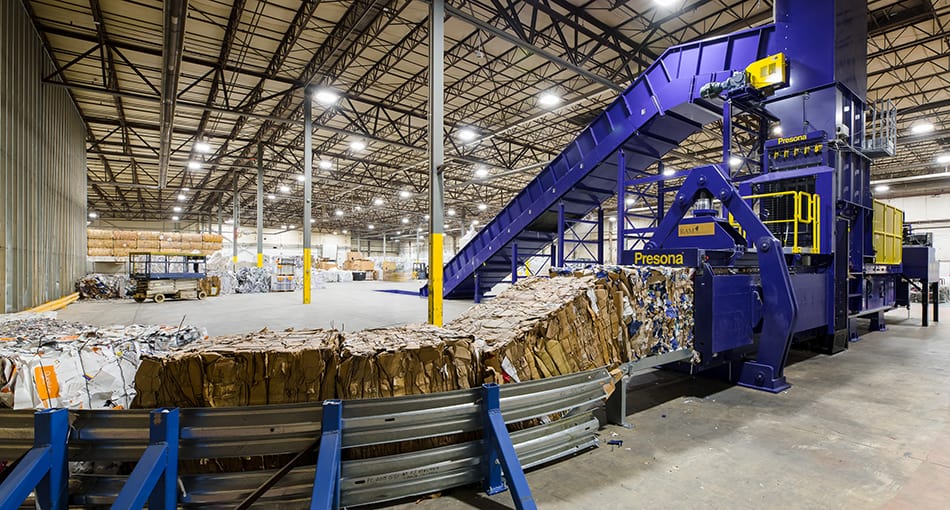 RAM Recycling, in Wisconsin USA, has improved its productivity and decreased its operating expenses with the installation of a Presona LP 140 XH1S baler supplied by Presona distributor Stadler America.

In 2015, after a relocation to a bigger building Tony Duckert, owner and president of RAM Recycling, went looking for a new baler. He knew what he didn’t want. He didn’t want a two ram baler since they require a dedicated operator. Nor did he want a single-ram shear baler because of the energy consumption. So he decided on a used European prepress baler and liked it. However, after a couple of years it became apparent that this prepress baler couldn’t keep up the increasing amount of materials that needed compacting. Enter the Presona LP 140 XH1S (really big) baler.

But let’s not get ahead of ourselves. Let’s start from the beginning of the story of how RAM Recycling became the largest privately owned high-grade packer in Wisconsin.

Tony Duckert, the owner and president of RAM Recycling, has worked in the recycling industry for more than 25 years. Tired of corporate life, he left his job with a national waste and recycling company Friday, Jan. 20, 1996. The following Monday, he started his own company, Waste Connection, that provided solid waste and recycling consulting and brokerage services to corporate clients.

At his customers insistence, he began managing loose tons, partnering with a sheltered workshop to physically process the material. That operation would go on to employ 65 people with disabilities as well as a staff of nondisabled supervisors before the agency he was working with was acquired and left the recycling business. First baler was a two-ram

Faced with whether to contract with third-party processors or to start his own processing facility, Duckert opted for the latter. In 2010, he began operating RAM Recycling out of a 27,000-square-foot building with a single two-ram baler. “It was not ideal,” he says of the location, adding that his company soon outgrew the leased building.

In 2015, he purchased an 81,000-square-foot building on 6 acres in Oak Creek and relocated the company. RAM Recycling occupies 65,000 square feet of that space; the rest is leased to a tenant. The company specializes in free sheet and groundwood grades primarily from the printing and packaging sectors. Duckert describes RAM Recycling as “the largest privately owned high-grade packer in Wisconsin.”

The company also processes plastics, including stretch film and some rigid material.

Expanding with a used prepress baler

When RAM Recycling relocated, Duckert kept the two-ram baler from his previous facility but needed a second baler. He says he knew that he didn’t want another two ram because he didn’t want to have to have a dedicated operator. Nor was Duckert interested in a single-ram shear baler because of the energy consumption shearing requires. Instead, he purchased a used prepress model from a European manufacturer. However, he says that model had trouble keeping up as the company tripled the tonnage of high-grade paper it processed from 2015 to 2018.

In September 2018, RAM Recycling installed the Presona LP 140 XH1S prepress baler supplied by Stadler America, the U.S. distributor for the Swedish company. But before the sale and installation took place, Mat Everhart, Stadler America chief executive officer, had to convince Duckert that he was making the right choice.

“I had never even heard of Presona and Stadler,” Duckert says. But through his research, he says he learned they were well-respected names in Europe. That still didn’t allay his fears, though.

Tony and his management team joined Mat on a trip to Europe, where they saw four Presona balers in operation at different sites. “I was blown away by the throughput and technology,” Duckert says. “We were really pleased with what we saw.”

Despite witnessing the impressive performance of the balers firsthand, Duckert says he was still concerned. “Presona had tried to make inroads into the U.S. market before. I was concerned about parts and service.”

Presona and Stadler America answered that question by setting up service and a big inventory of spare parts through a company about an hour away from RAM Recycling.

Duckert continues, “That addressed all of our concerns. After a year of due diligence, our machine went in Sept. 12, 2018.”

The company’s Presona LP 140 XH1S baler is capable of baling 6,000-plus tons of high-grade material per month on one shift, Duckert says. “We’re not quite doing that; we wanted to size it to grow into it.”

As far as Duckert is concerned, he purchased the “Cadillac of balers.” He says, “I was told by Presona executives that it’s the only machine like this in the U.S. and only one of six this size operating in the world.”

Among the features he appreciates on his Presona baler is the wide infeed opening that does not taper toward the bottom like the company’s previous prepress machine did, meaning large material does not get stuck or bridge, Duckert says.

Presona’s prepress technology versus that of a shear baler delivers “equal if not more throughput with less horsepower and less energy consumption,” he adds.

He describes the machine’s safety features as “smart and not cumbersome,” adding, “It is literally impossible to make a mistake with lockout/tagout.”

Duckert also says the operating system is “intuitive” and provides a great deal of information as far as throughput is concerned.

“Mat and his team impressed me with the knowledge of their product and the industry and his honesty and integrity,” he says. “Stadler is just a name; the people make Stadler.”

Duckert continues, “I couldn’t be happier with the attention to detail they showed. I’m very happy with my decision to go with Presona. I’ll gladly show off our baler to anyone who wants to come take a look. It is really impressive!”

This story was first published in Recycling Today. It has been edited.

In 2015 DS Smith realised that they needed to replace their bale [...]