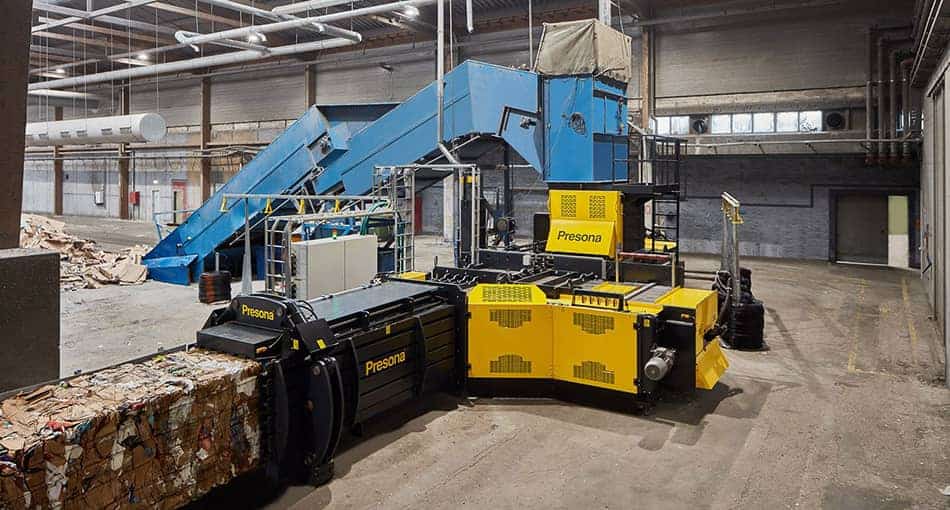 “In practice, we have put a turbocharger on a baler. I think we are the first in the world to do that,” says Stefan Ekström, CEO of Presona.

The new baler, which has the fitting nickname “Mega”, is intended for recycling and sorting plants or other businesses that bale large quantities of material.

The secret to MP 270 MH’s high performance is parallel processes and self-optimization. When the material that is to be compacted falls into the baler, its density is automatically measured and then the baler optimizes itself and proceeds to pre-compress the material to 200 kg / m3. The pre-compressed material is then moved to the main press which creates finished bales while new material is being pre-compressed.

“Being able to pre-compress and make finished bales at the same time means that the capacity will be much higher compared to other types of balers on the market. The pre-compression can be compared to a turbocharger – by increasing the density of the added material we get much higher output, ie more bales per hour. This means that the cost per bale will be lower,” says Stefan Ekström.

The baler has a real capacity of 45 tonnes of material* per hour. That’s 50 percent more than Presona’s second-largest baler, the LP 140, and three times as much as the smaller LP 60.
(*Material weighing 50 kg/m3 before baling.)

The MP 270 MH’s software for self-optimization ensures that the machine is always running optimally. This function also reduces the need for staff to set up and change the baler’s programmes. Less staff input decreases the risk of incorrect settings which can prevent the baler from being used to its full capacity.

Like all Presona balers, the MP 270 MH is a real multi-material machine. Whether you want to bale cardboard, plastic film, household waste or newspaper, “The Mega” can do it. There is also a special programme for pressing PET, which can be a difficult material for many balers.

“This design’s super-high capacity means that it can replace several smaller balers at a significantly lower cost. The cost per baled tonne drops significantly when you use a MP 270 MH,” says Stefan Ekström.

Presona AB (Sweden) has been supplying the recycling industry across the globe with high quality, cost efficient balers for more than 70 years. www.presona.com.

For the media: Photos and video links

Get news and use cases straight to your inbox by subscribing.

We continue supporting your business

Dear customer, Covid-19 poses challenges for businesses all over the [...]

In 2015 DS Smith realised that they needed to replace their bale [...]

This website uses cookies so that we can provide you with the best user experience possible and show you ads for Presona products and services. Cookie information is stored in your browser and performs functions such as recognising you when you return to our website and helping our team to understand which sections of the website you find most interesting and useful. More information