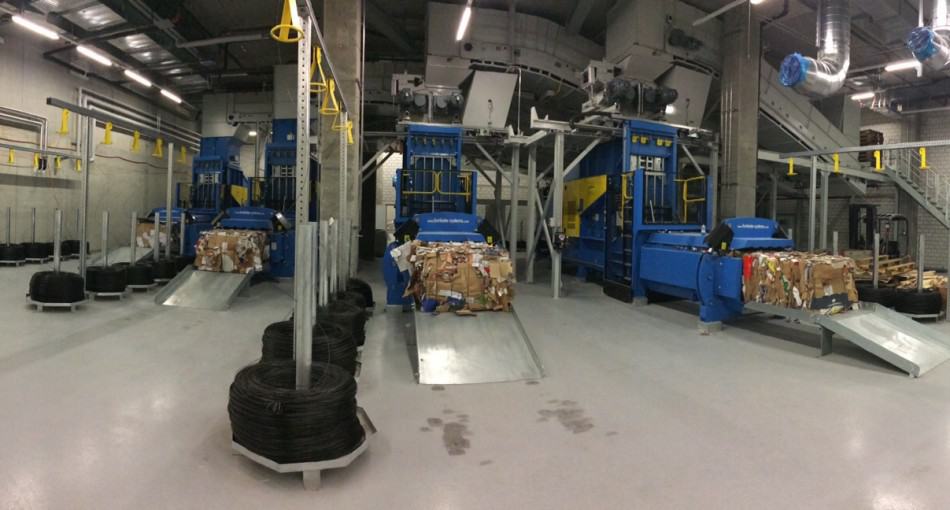 More than 100 tons per day at COOP in Schafisheim (CH)

At COOP’s new distribution centre in Schafisheim, 30 minutes east of Zürich in Switzerland, it is now time for start-up of the system for processing of packaging materials and waste from COOP’s stores in the catchment area. The baling system that a.a. includes 4 Presona balers has been installed by Hunkeler Systeme AG, Presona´s distributor in Switzerland.

According to official sources, the building of COOP´s new distribution centre was the biggest private construction site in Switzerland. The new centre that will go live in February 2016 will lead to fewer truck transports after a number of smaller sites have been redirected to the new centre. COOP’s goal ist to reduce the CO2-emission with 10 000 tonnes per year.

When the site is in full operation it will, every day, process more than 100 tonnes of PET-bottles, plastic film, plastic packaging, wood pallets, cardboard, waste including organic waste. The material is sorted and compacted into bales for recycling or waste-to-energy usage. Thanks to Presona’s high compaction ratio, COOP can reduce their transportation costs and reach the high-priority goal to reduce the CO2-emmissions.

The installation work faced quite a few challenges, not least the brining in of the four big machines into the ground floor of the gigantic building. The balers with weights of up to 25 tonnes had to be taken in to the building through the ports where the trucks will dock for loading and unloading. Thanks to a system of air cushions the machines was placed on their foundations with a minimum of disturbance and a maximum of precision. In just four days from delivery, the four balers were erected and ready to take in operation.

One third in two hours

The baling system, designed by Hunkeler to minimize the environmental impact, can process more than 100 tons material per day. One third of the material flow arrives early in the morning and must be processed within two to three hours to avoid overfilling of the site. Cardboard and plastic packages and PET-bottles arrive to a over 100 m long conveyor system from 32 picking stations. The four Presona balers with press forces of up to 85 tonnes safeguard an optimized compaction of the material. The plant is equipped with an automated personal safety system for maximum security for operating personnel. Hunkeler has also delivered an automated system to process the organic waste, residues and wood.

We continue supporting your business

Dear customer, Covid-19 poses challenges for businesses all over the [...]

This website uses cookies so that we can provide you with the best user experience possible and show you ads for Presona products and services. Cookie information is stored in your browser and performs functions such as recognising you when you return to our website and helping our team to understand which sections of the website you find most interesting and useful. More information